The vast splendour of Iceland’s highland desert provides the setting for the tour, and given that some 80% of the country’s area is uninhabited and lies over 400 metres above sea level, there is plenty of it.
Despite the distance covered, the route we take allows plenty of time for frequent stops to enjoy the ever changing landscapes of glaciers, gravel and sandy deserts, lakes and lava fields.

A long drive featuring many natural wonders as you pass the highland road Sprengisandur, where few small unbridged rivers will be crossed.

Sprengisandur means a certain part of the Highlands of Iceland between the glaciers Hofsjökull and Vatnajökull as well as the highland road traversing this region.

Origins of the name: People had to cross the desert fast with their horses, to “spring” over it, so as to get new grass and water for themselves and the animals. There has also been a lot of superstition about it. Stories about bad ghosts and criminals were told, so that the old tracks were no more in use for some time.

In the middle of the track there is a small oasis with a hut of the Icelandic Hiking Club: Nýidalur. In Nýjadal, it is ideal to have a lunch break and walk in the green valley. 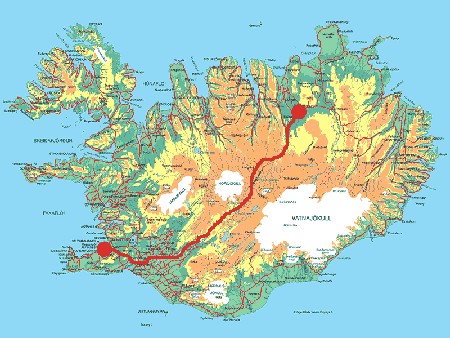